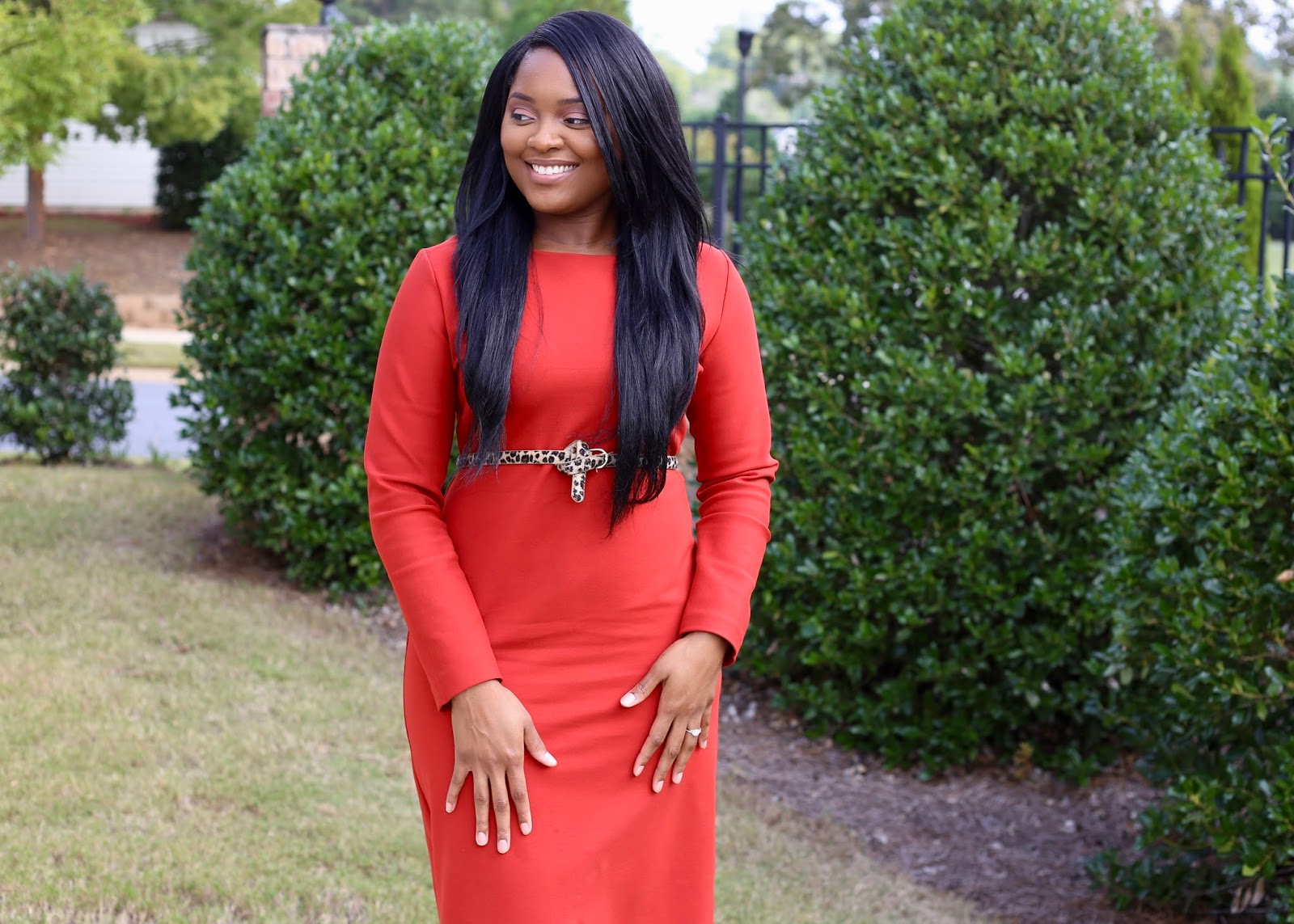 I’m finally back with a new make. I decided to take it a bit easy this go round and sew up the McCall M6886, which is another pullover, close-fitting dress. I mentioned this pattern in my latest pattern haul and decided to give it a try after seeing a few other sewing bloggers rave about it.

I decided to use a burnt orange ponte knit fabric that I purchased from Joann for another project. Turns out that it wasn’t the best choice for this project either, as it is heavyweight and very stable. After sewing it, I quickly realized that this fabric was best fit for pants, jackets, and vests. However, I was able to make it work by adding waist darts in the back and it gave the shoulders a very structured look that I enjoyed. Nonetheless, I have about a yard left that I’m figuring out what to do with. I think I may go back and purchase a few more yards to create one of those fall vests that I have plenty of patterns for. ?
As many other bloggers have mentioned, this pattern is great to use as a block pattern. Meaning, it is a great foundation to use for other designs. I decided to sew view B, which is the long sleeve, almost ankle length version of the dress. The dress seems a bit long on me, as I’m only 5’5; however, with my four inch heels, it’s perfect.?
The patterns calls for a simple turned hem; however, I do not like the way that looks. I have come to appreciate a hand stitched blind hem instead. Also, instead of using my twin needle around the neckline, I decided to create my own facing instead. This gives a much cleaner look and was fitting for what turned out to be a very structured garment. If you’d like for me to do a quick video on making your own facing, leave a comment below.
I cut a size 16 for this dress based on the finished garment dimensions. The 16 was a bit small for my hips, but I knew that the garment would stretch. I did a quasi tissue fitting just to adjust the waist length. I have a short bodice, so I had to shorten it about 5 inches. Though I got that fitting adjustment right, I neglected to actually fit the waist. I assumed that it would be cut small enough to contour. Well, when I put on the dress, it did fit at the hip, but it was frumpy everywhere else. I honestly looked like I was placed in a bag. Back to the drawing board.
I grabbed some pins and did my best to pin darts in the back, since that’s where the excess fabric was. I will admit that this is VERY hard to do by yourself. I stood in the mirror, with a handheld mirror in one hand and pins in the other, and contorted my hands to get the pins where they needed to be. If you’re attempting to do waist darts, I’d recommend grabbing someone if you can. If you can’t, I’d recommend using safety pins instead of straight pins. This will make your life so much easier! They’ll stay in place and won’t fall out or stick you as you’re trying to get out of the garment.
Because this is so difficult to do alone, there are only three points that I would focus on: pinning the top, middle, and bottom of your dart. If you can get these three points, you’re pretty much set. Everything else will stem from this.
Once I at least had those three points in place and the garment removed, here’s what I did:
Surprisingly, it only took one try at pinning to get the darts right. After baste stitching, I went back and stitched the darts. Now, there are some things that I noticed that I could have done a bit better. For instance, my fabric wasn’t completely straight on one side, so I can see a bit of a diagonal pull on one side. Otherwise, for having to do this by myself, I think I did a pretty good job. I considered adding darts to the front, but felt that it would make it difficult to pull the dress on and, frankly, I was ready to be done with it. ? 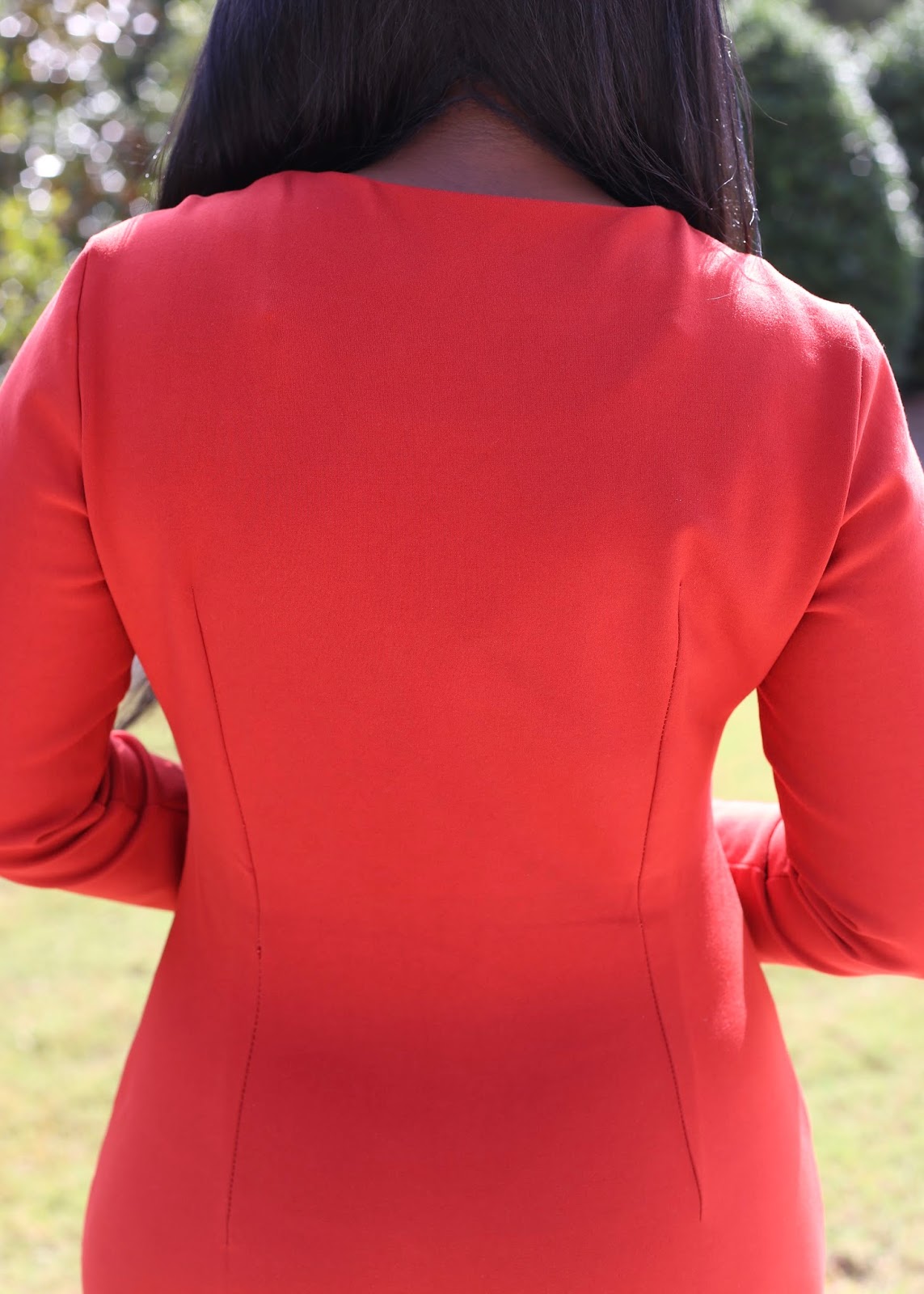 Despite the fact that this fabric didn’t make this project easy, it did give me a learning experience. I’m so glad that I was able to figure out how to resolve this issue. It only shows that I’m growing and learning as a seamstress, which is the most important thing.
Another lesson that I learned was the importance of making sure your bobbin is threaded properly. I’ll admit, I knew that my bobbin wasn’t wound the best, but I decided to continue sewing anyway. Well, of course, my stitches skipped and the quality was terrible. I just kept going until I eventually got tired of it and re-wound my bobbin. Don’t be like me. Do it right the first time to save yourself the headache. Now I’m upset at myself because the inside of the garment isn’t great and this very simple make should have been perfection.
Overall, I do like the structured look of the finished garment. It has a very corporate and business like feel that I enjoy. Although, I was in a bit of a quandary when I tried it on and felt like it needed a belt or something. It just needed some umph, so I added a leopard print waste belt to bring some character, although it could very well be worn without.
I will definitely make this pattern again with more appropriate fabric and only after doing a real tissue fitting. I’d also make it more tapered at the bottom for more of a pencil dress look. 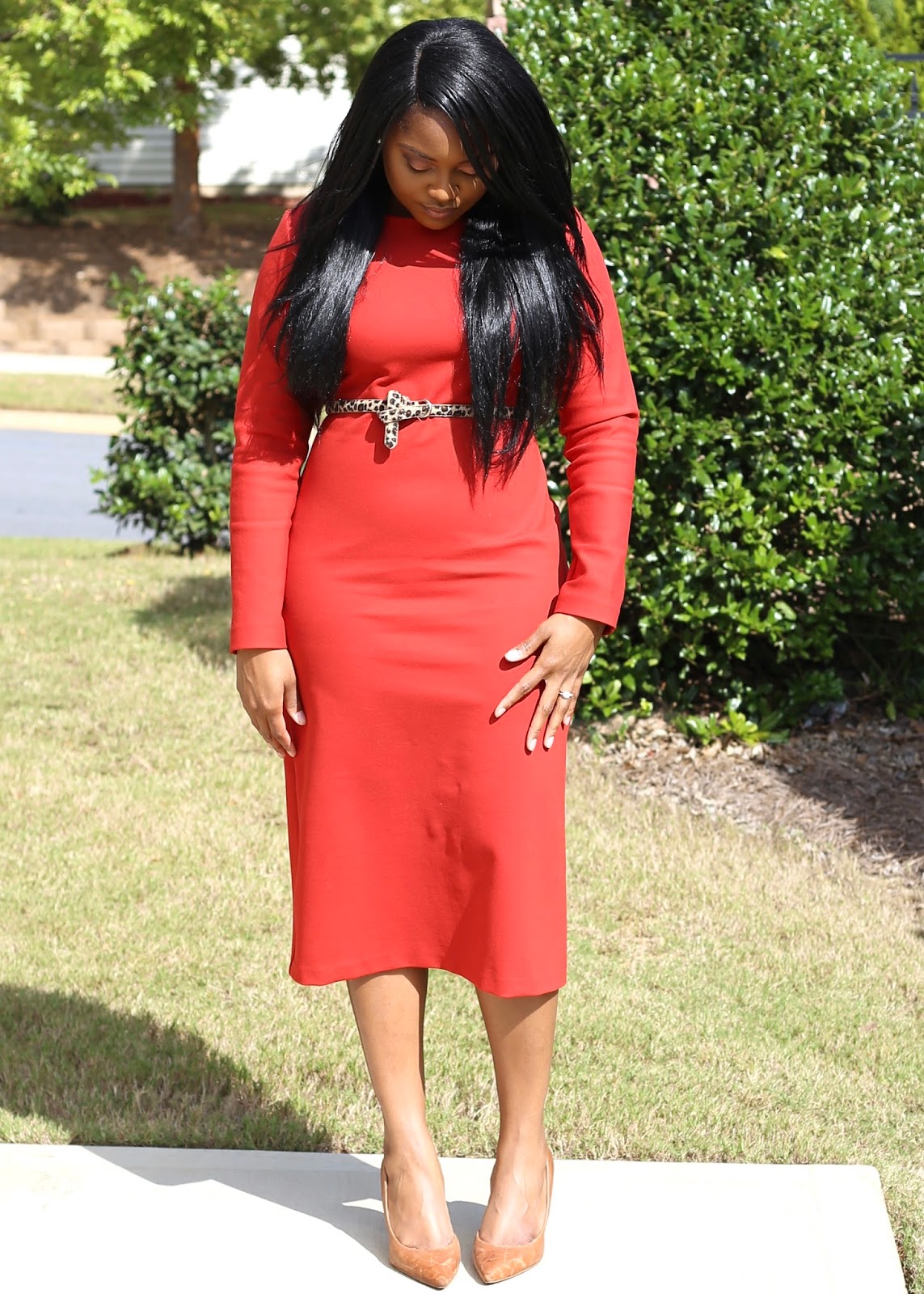 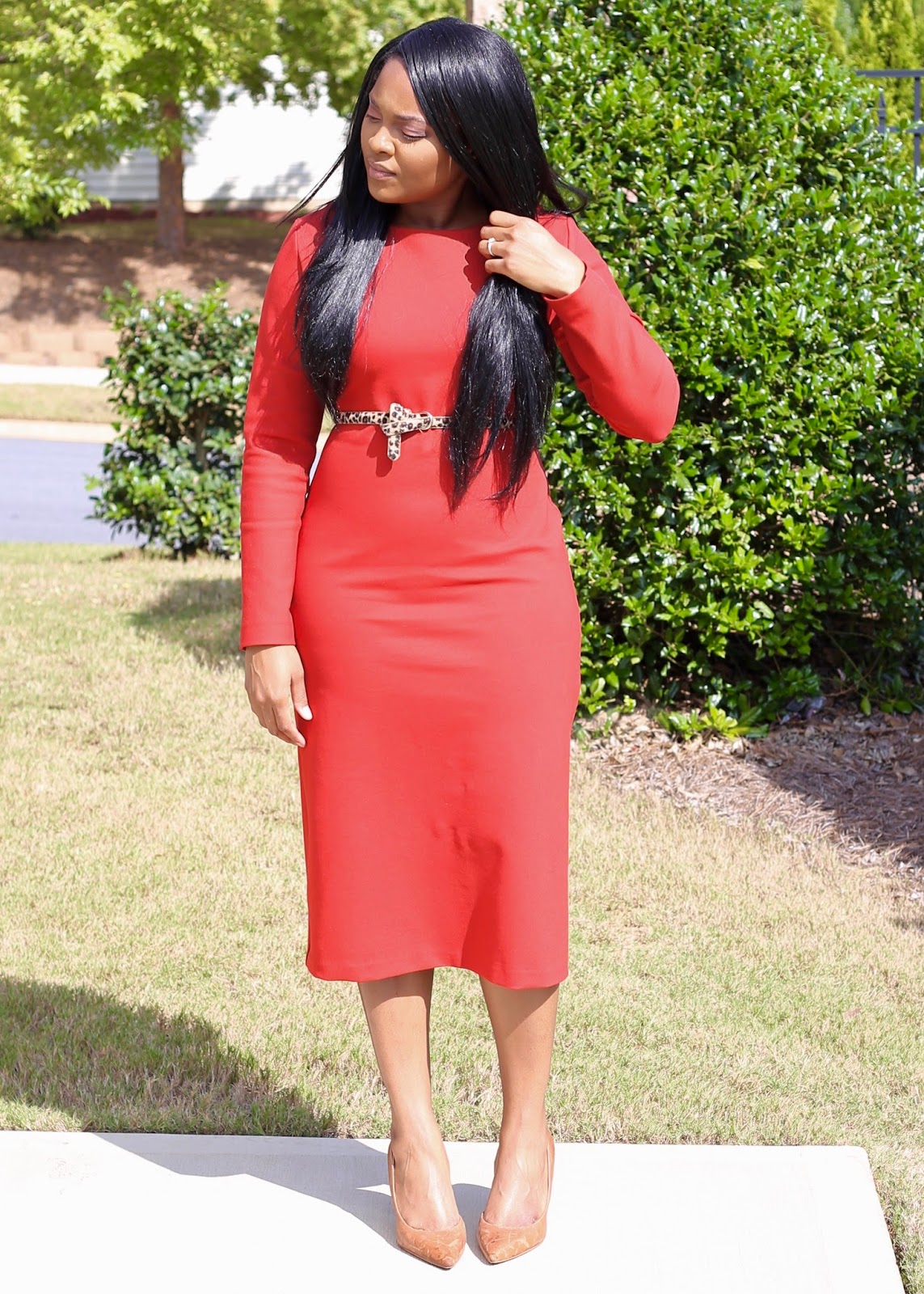 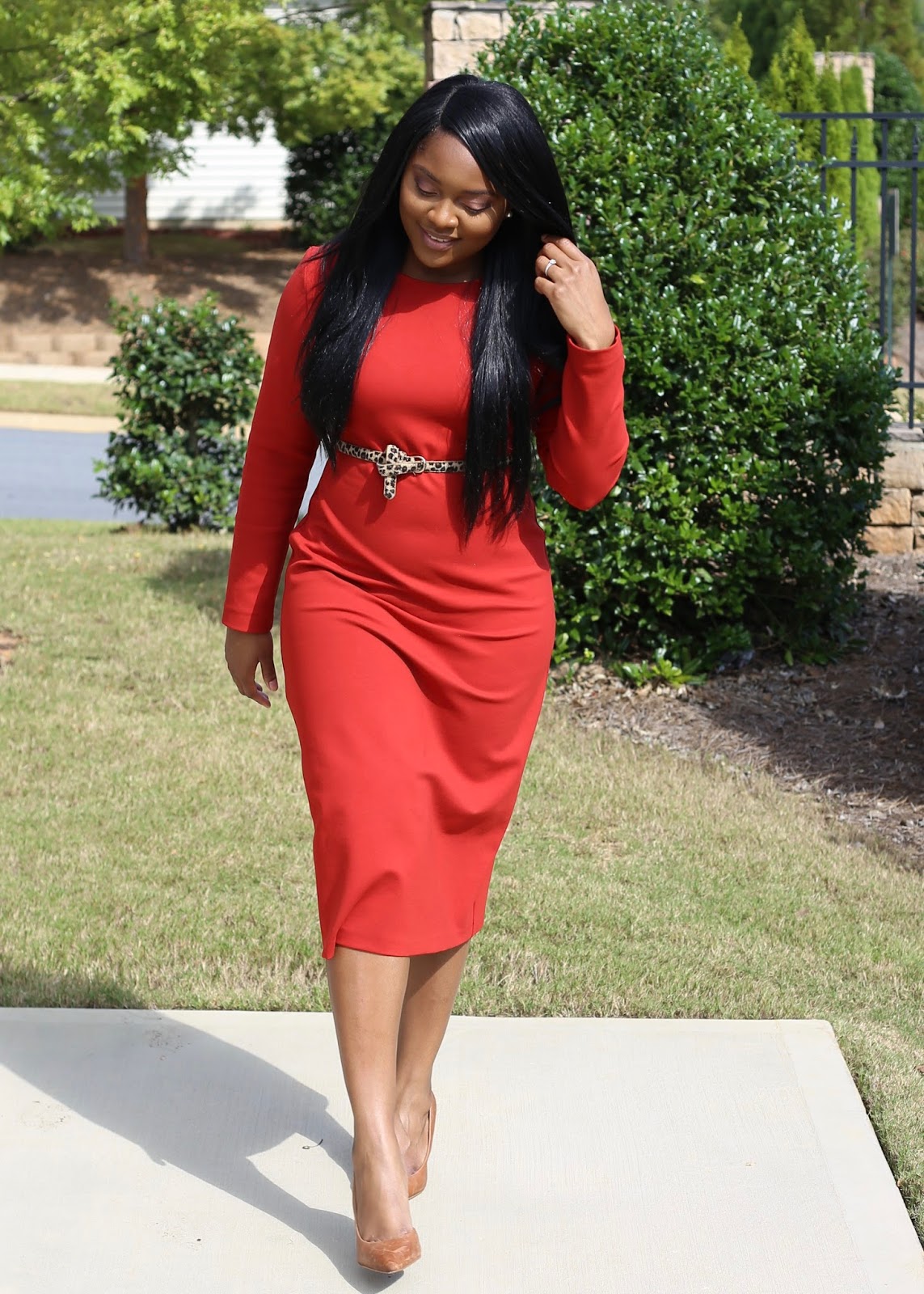 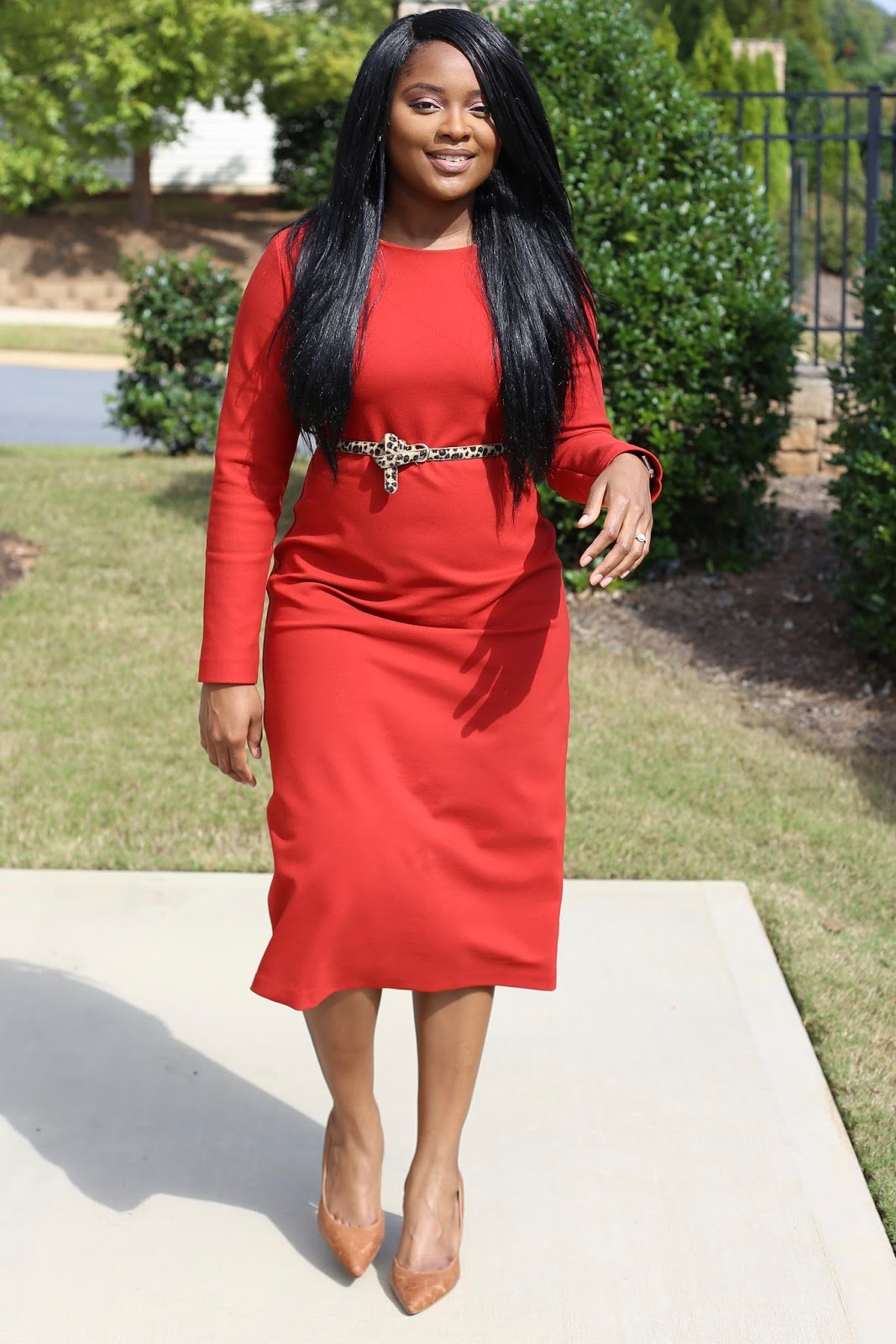 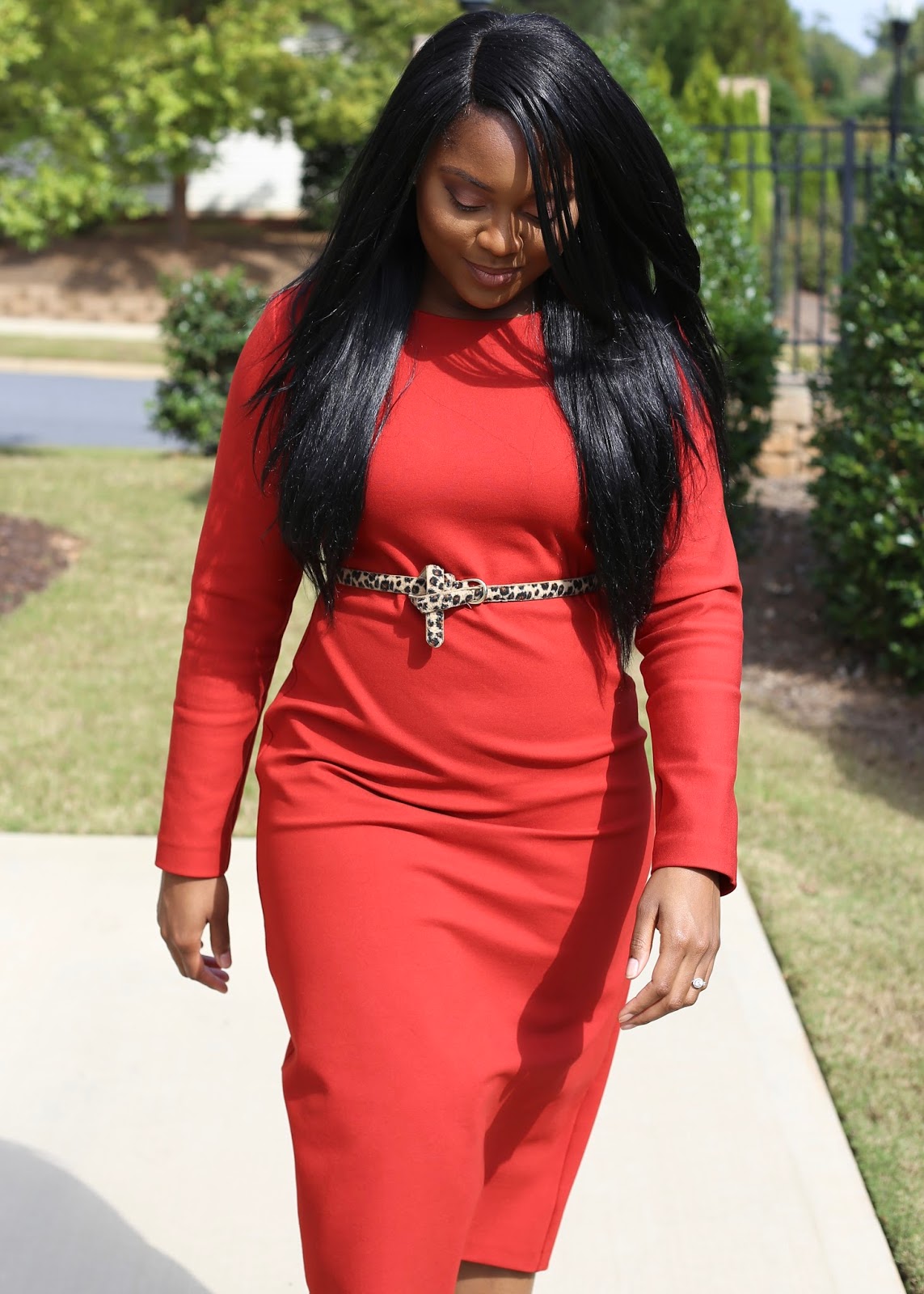