By request, I have decided to post the recipes that I used to create my vegan soul food dinner that I posted on Instagram and Facebook. I received some questions about it, so here are the details for my vegan fried cauliflower “chicken” and mac & “cheese.” 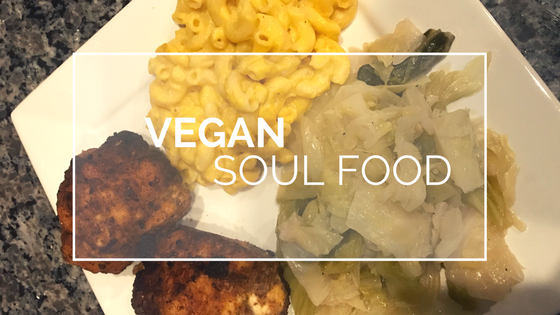 So, first things first…I’m not vegan. ?I talked about this in my vegan update video. I’m vegetarian with mostly vegan tendencies. ? Was that confusing enough? Haha! I haven’t given up leather, honey, other things with animal byproducts, so technically, I’m not welcomed in the vegan world. I do, however, eat a mostly plant based diet, though sometimes my meals do have traces of egg in them. That’s about the best that I can do for now and I’m completely ok with that.

Now that that’s out of the way, know that this meal is not typical of my diet. For the most part, I keep it very simple with my meals. I’ll eat oatmeal with pecans, raisins, and honey for breakfast, have a salad for lunch, and jazz it up for dinner. By jazz it up, I mean a vegan burrito, spaghetti, pizza, or just brown rice and beans. In a gist, I eat “veganized” versions of everything I ate pre-diet change.

Because I have more time on the weekends, I do get to explore more food options. For example, on Saturdays, I cook grits (I’ve included a wikipedia link for non-Southerners), toast with vegan butter, and a veggie sausage patty. This Sunday, I even went as far as baking some biscuits and making vegan gravy. Who doesn’t love biscuits and gravy?? By the way, my non-vegan husband LOVED it.

One thing that I’ve found is that becoming vegan (or some variation of a plant based diet) causes you to really learn how to cook. Being from the south, I used to depend on flavoring from meat; however, now, I’m forced to mix spices and ingredients to get a flavor that is just as good, if not better, than something with fat drippings in it. That, my friends, takes skill. I’ve explored more ingredients than I ever would had I continued a carnivore diet.

Ok. Enough of my rant, here are the recipes (with commentary).

This recipe is modified from SweetPotatoSoul’s Fried Cauliflower “Chicken” recipe. I did not use the seasonings that she used. Instead, I used some Bobby’s all purpose seasoning, pepper, some of McCormick’s smoked applewood rub, and a tad bit chipotle honey. This is how I would have seasoned actual chicken. I only took the concept of using flaxseed as egg replacement and double breading from the original recipe. Below is the video for that recipe that you can use as a base to modify to your liking.

I previously posted a vegan mac and cheese recipe on the blog that’s very similar to what I used for this dish. The only difference is proportions and the addition of nutritional yeast flakes. The first time I attempted the vegan mac & cheese recipe, it went ok. I wasn’t too excited about the texture, but after reading some other blogs, I realized that it was due to my blender. It wasn’t powerful enough. So, this time around, I used my NutriBullet to blend and it was perfect! I can’t stress the importance of having a quality, high powered blender for this recipe to ensure that the “cheese” is smooth and creamy.

I’d also like to note that this mac & cheese is even better on the second day. We eat leftovers here! After reheating it in the oven, the texture was even more like real, baked mac & cheese and the edges browned up a lot more, really making it look like the real thing. The best part, no greasy, stomach pain causing cheese. My husband really liked it this go round. He even suggested that I cook it for some non-vegans just to see if they could tell the difference.

Below is the recipe from TheChicisNatural.com.

2. Bring several cups of water to boil in a small pot. Place potatoes, carrots, and onion in the water, and cook for about 10 minutes, or until vegetables are tender and soft enough to blend. Drain water.

3. In a blender, process the cashews, butter, nutritional yeast, garlic, lemon juice, vegetable stock, dijon mustard and seasonings. Add softened vegetables and water to the blender and process until smooth and creamy.

4. In a large bowl, pour cheese sauce over the cooked pasta and toss until completely coated, then spread mixture into a square baking dish.

4. Bake for 25 to 30 minutes or until browned and bubbly around edges.

I really don’t have a recipe for the cabbage. I learned to cook by tasting and adding seasoning as needed. But just for kicks, I chop my cabbage head and add it to a pot that’s pre-heated with about 2 tablespoons of vegetable oil. I let the cabbage cook, covered, on a medium heat until it is tender, being sure to stir occasionally. Once tender, I add salt and pepper– no exact amount. That’s it!

In conclusion…
By no means am I an expert at preparing plant based/vegan meals. I just do what works for me and I encourage you to do the same. For me, that’s keeping it really simple such that it isn’t a burden that would cause me to revert back to my old diet. Furthermore, it just makes life easier when you don’t complicate your meals.

Here’s a tip: Always, always plan your meals. You don’t want to be caught trying to find something to eat at the last minute, because the world isn’t always vegan friendly. It’s not like you can just go to a drive thru and get a vegan meal like you could a chicken sandwich. (Unless, of course, you live in a large city). At best, you’d be able to order some french fries that have been fried in the same grease as the chicken. I’ve been there before and that’s not a great position. Now, I plan every meal for the week and grocery shop accordingly. I also keep snacks with me to eat between meals so that I don’t end up purchasing fast food french fries.

If you’re just transitioning, take your time and don’t beat yourself up if or when you take a step back. It’ll all work out in time. Hope this helps!