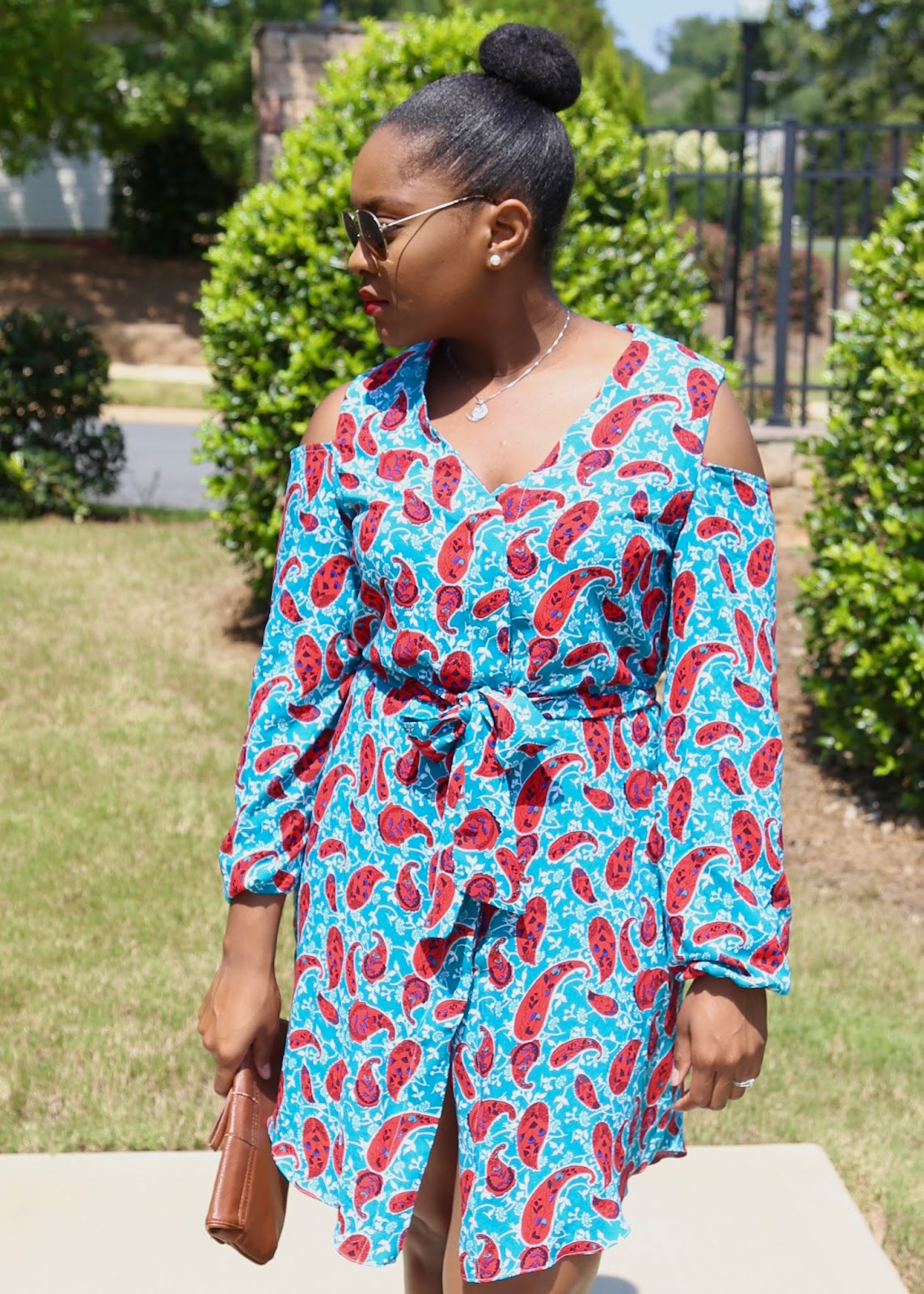 Foremost, let me just say thank you for all of the support of the McCall M7627 wrap dress! I am completely floored by the out pour of compliments. Have you ever felt like you don’t look your best, but you get the most compliments? Well, that’s how I felt about that make. I wasn’t 100% confident in it because of the fitting issues, but you all embraced it and made a girl feel all giddy inside…even if I was hiding my face from the camera. ? Hey, it’s like that sometimes. Thank you! You guys rock! You never know what your compliments can do to brighten someone’s day up. So, please always say/type those positive things that you’re thinking. It goes a long way. 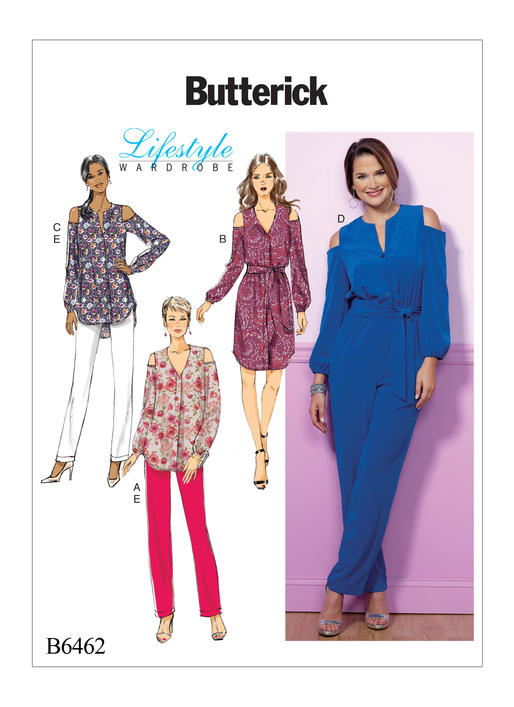 I purchased this pattern in July and mentioned it in my pattern haul video. I had a few fabrics in mind to make View B, but ended up purchasing some floral liverpool from LA Finch Fabrics. Ultimately, I decided that it wasn’t the right fabric for the job and used it for my Pinterest inspired DIY Maxi Dress. So, I was left “fabricless” (I don’t keep a stash). I ended up going to Joann’s and running across this beautiful teal, paisley fabric and thought it was perfect for this pattern. 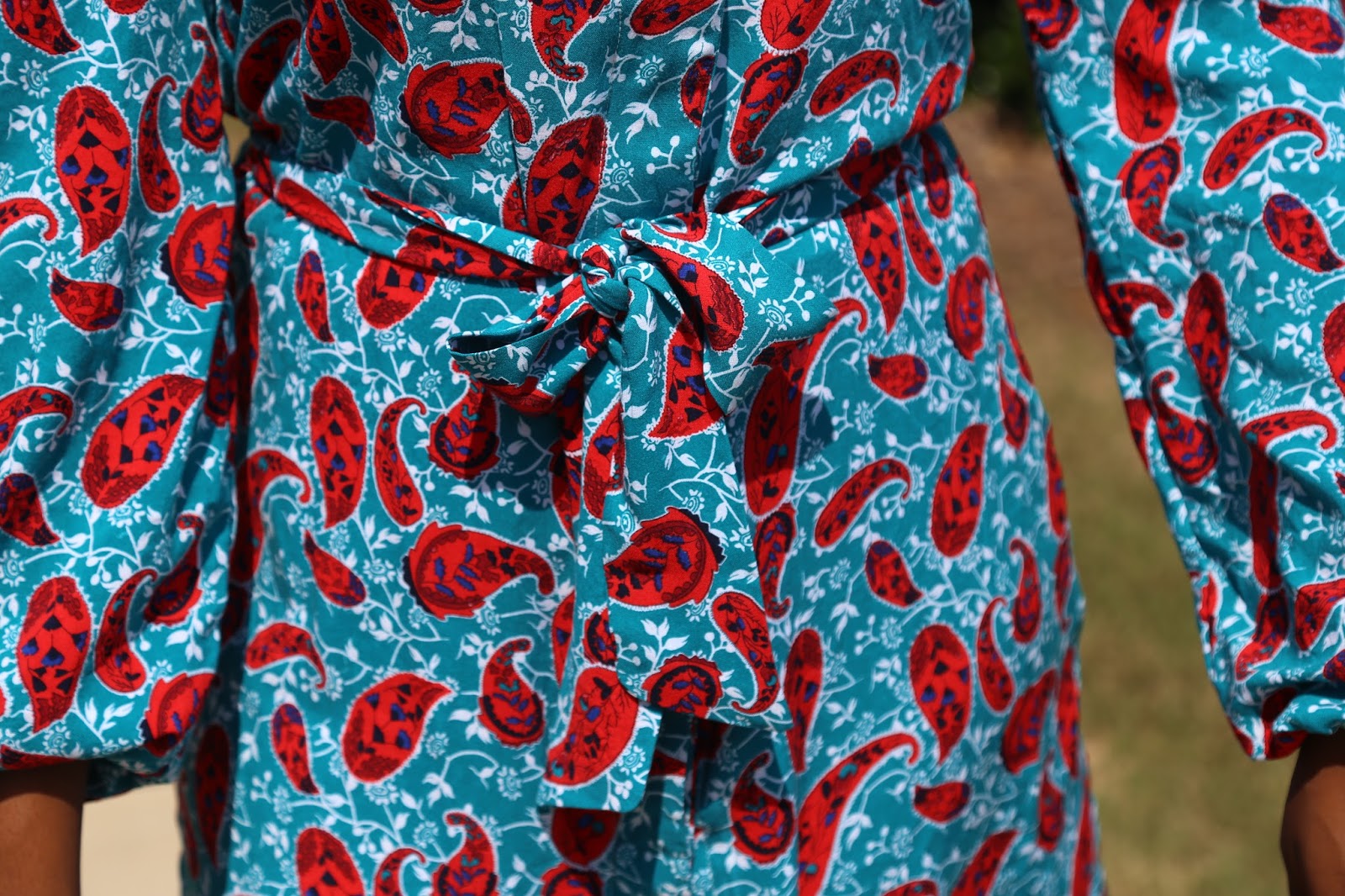 Well, as I started ironing the pattern to cut out, I realized that I didn’t have the correct size! The way my hips are set up, I’m no smaller than a size 16, but for some reason I only got the pattern sized up to a 14. What was I thinking? Well, after looking at the size chart again, I realized that I actually needed to be able to grade up to a 20 at the hip. I wasn’t even going to try to grade up from the 14. I was successful with my McCall M7531 dress, but I was not chancing this one. So, back I went to the store to pick up the right size. I bit the bullet a had to buy the pattern at regular price! The pain I felt paying for it was real. ?
With the right size in hand, I started laying out pattern pieces to cut the fabric. It was then that I realized that I only purchased enough fabric for a size 16. ? As this point, I was ready to quit before I even started. Thankfully, I was able to maneuver the pattern pieces enough to get everything cut out with the new, graded pattern pieces. Even though the interfacing yardage was the same between sizes 14-18, I ended up being short. Talk about being frustrated.
To grade, I cut out a size 14 for the bust, graded up to a size 16 at the waist, and a 20 at the hip. The grading process was straight forward. I just used a curved ruler to maintain the shape.
After cutting, it was time for transferring the markings. This was another tedious task that I eventually took a break from. I absolutely loved the fabric; however, it was near impossible to see any of the markings that I made. I decided to use yellow transfer paper, which was the best of the options that I had. This was barely good enough. Unfortunately, for this reason, a lot of my lines that I needed didn’t show up too well. So, in some areas, I just “guestimated.” In addition to having issues with the markings, I had a few mishaps with cutting. Because I graded up, there were some pieces that needed to be a smaller size than the others. I made the mistake of cutting the wrong size a few times, which meant rework and some issues during construction.
Ok. So I get over all of that, now it’s time to sew. I’ll admit that this was not a very hard pattern to sew (although I do not recommend it for a new beginner). The instructions were very clear; however, I decided to jump ahead. The result…having to undo a serged edge! It was a seamstress’ nightmare! I was really questioning if I was ok, because I was making way too many mistakes. I eventually worked through it and, ultimately, my final product does look like the pattern photo, but it was a chore getting there. 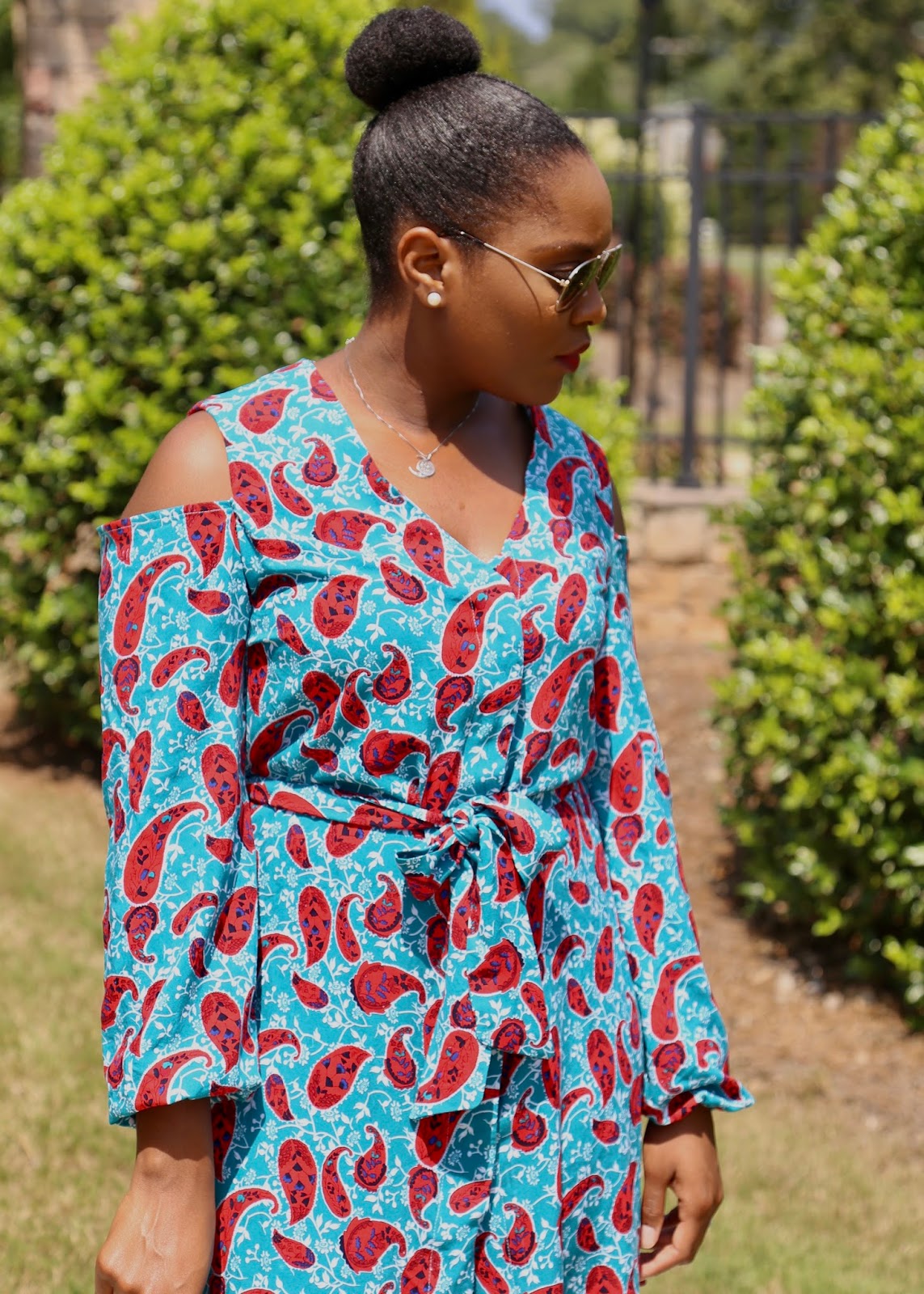 The pattern called for a narrow hem, so I decided to use my rolled hem foot

. This, too, caused me much grief. The fabric was fraying and I just didn’t think that I was doing a good job on the hem. In the end, the untrained eye probably won’t tell the difference, but as the creator, I know all of the issues.
Can you see why this project almost made me quit?
I made a few adjustments, including taking the right sleeve in a bit. There was some gaping at the top of the sleeve, but it was easily fixed. I’ve seen other versions of this make and the gaping seems to be common. Take this as a note to do some fitting on the sleeve to get that perfect fit. Also, I felt like the top was a bit low cut, so I also made adjustments to the top button placement to make sure I wasn’t too exposed. I still think that it’s a bit low for me, so I decided to wear a coordinating cami underneath. Lastly, the buttons don’t go all the way down, so expect some thigh action. I wasn’t too excited about this, so I threw on some shorts underneath. 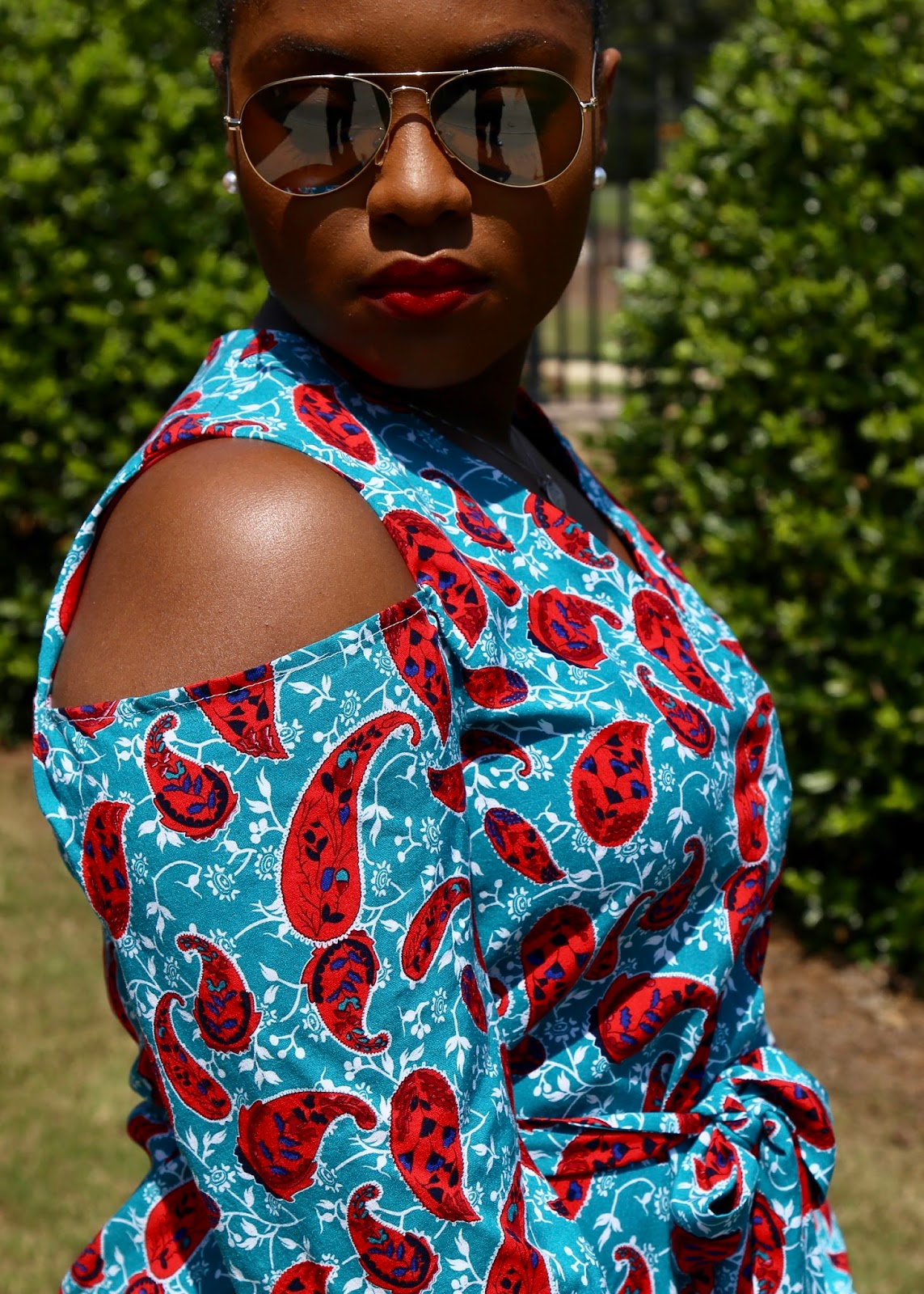 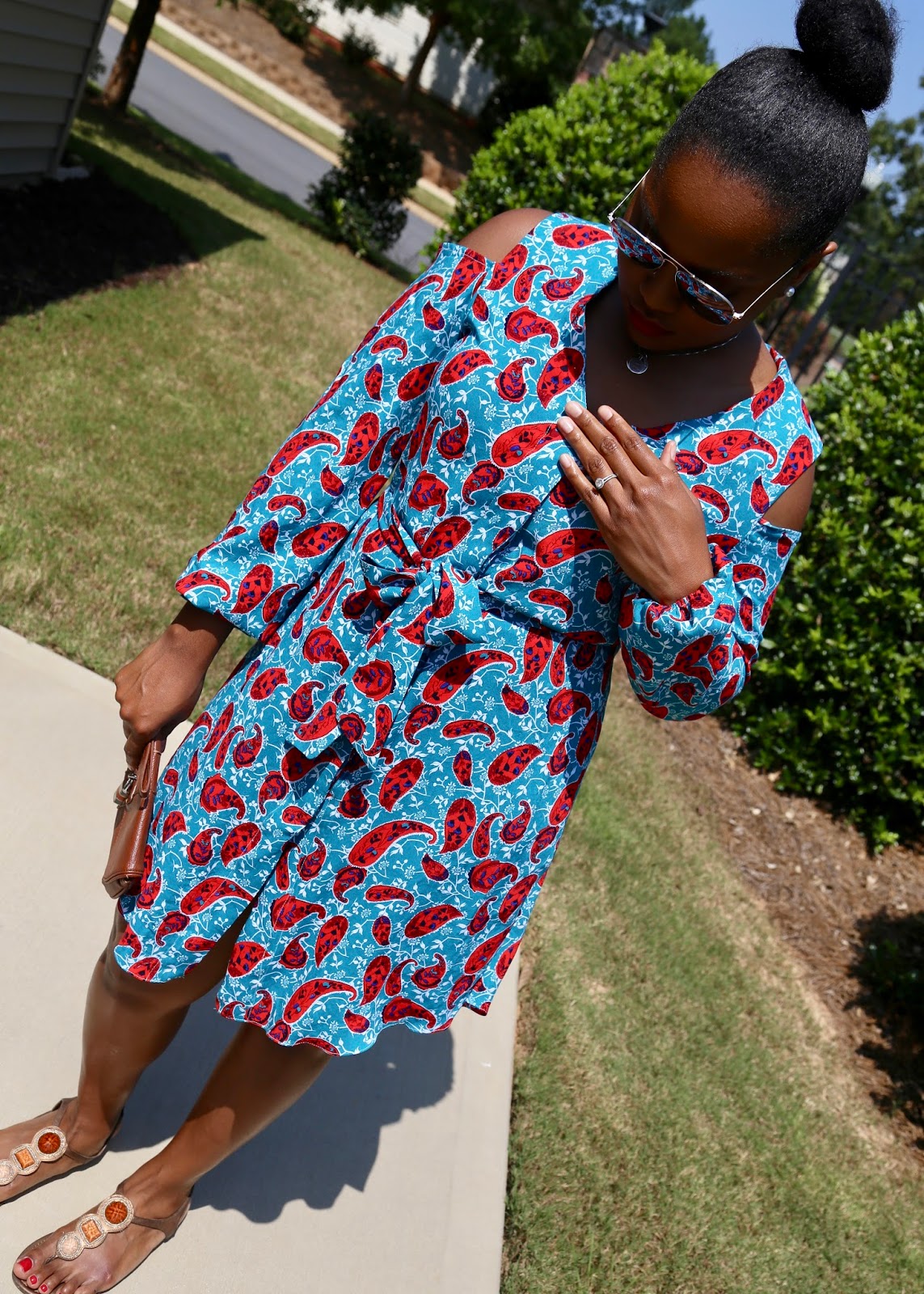 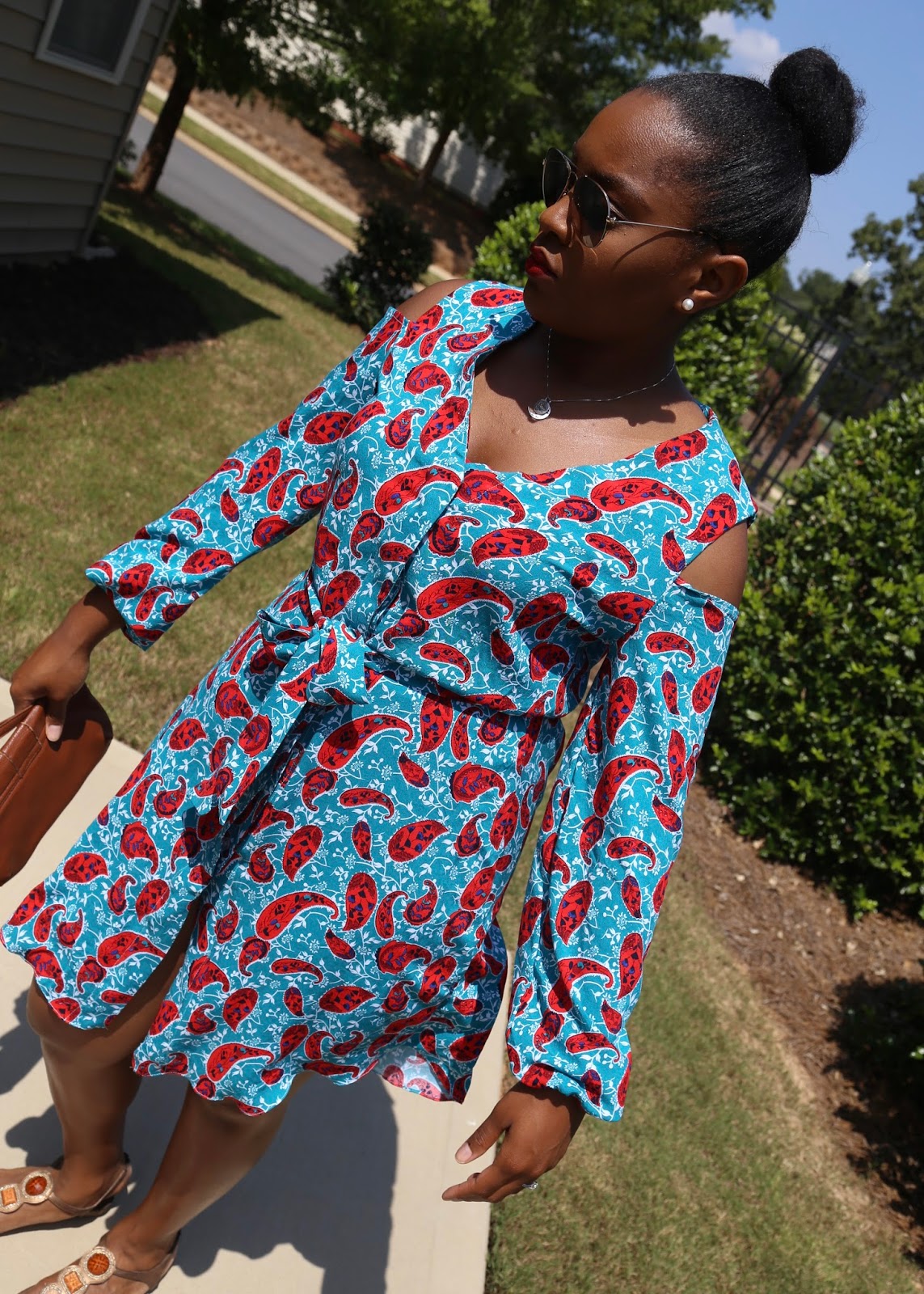 Ultimately, I trucked through this one and I am relatively pleased with the final product. It’s up in the air as to me making this pattern again, even if in another view. If I do, I’m well aware of what to look out for and I will most definitely use another fabric…perhaps linen. It is definitely a cute make, but one that requires patience and some level of expertise. It is not beginner friendly, by any means. 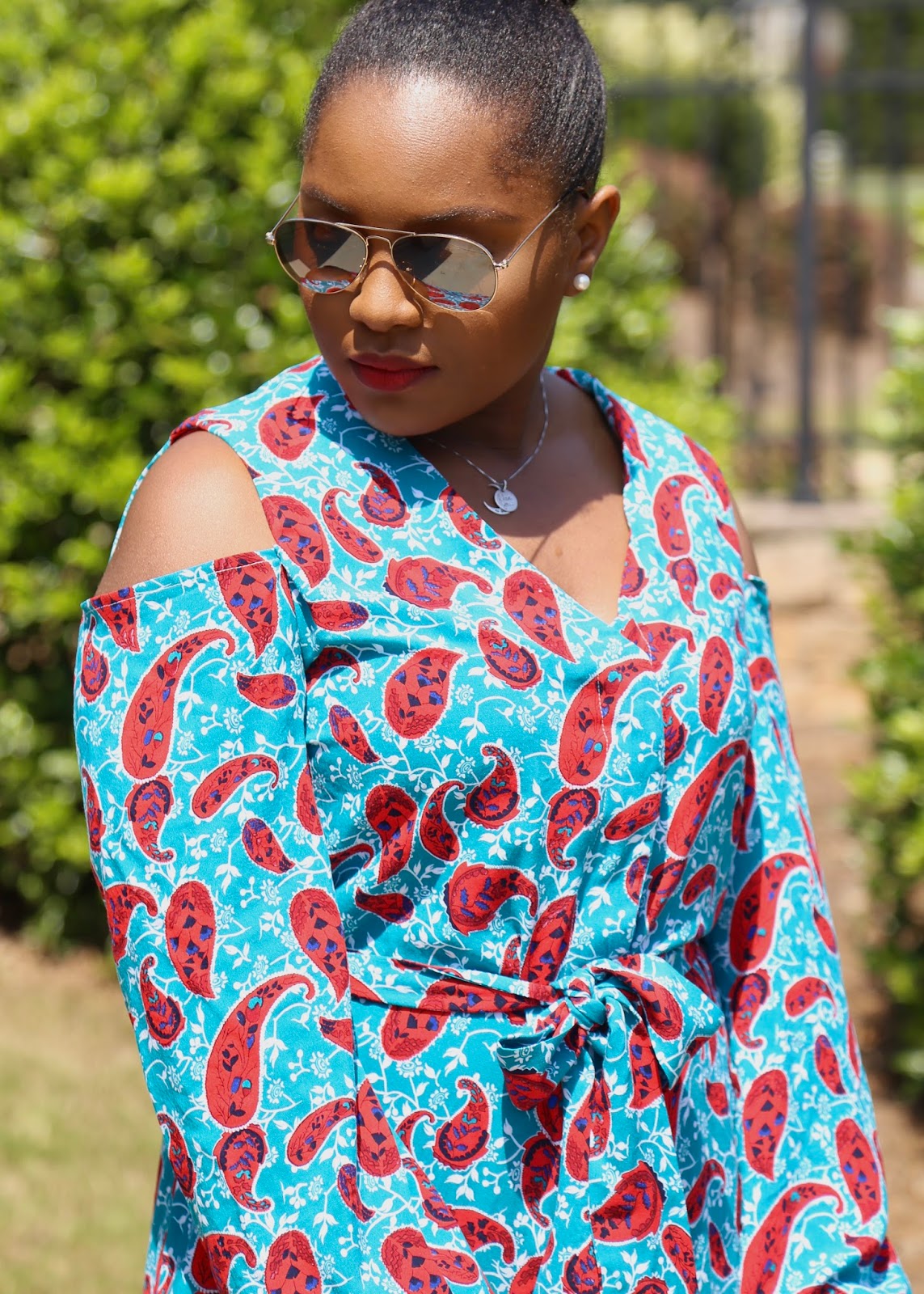 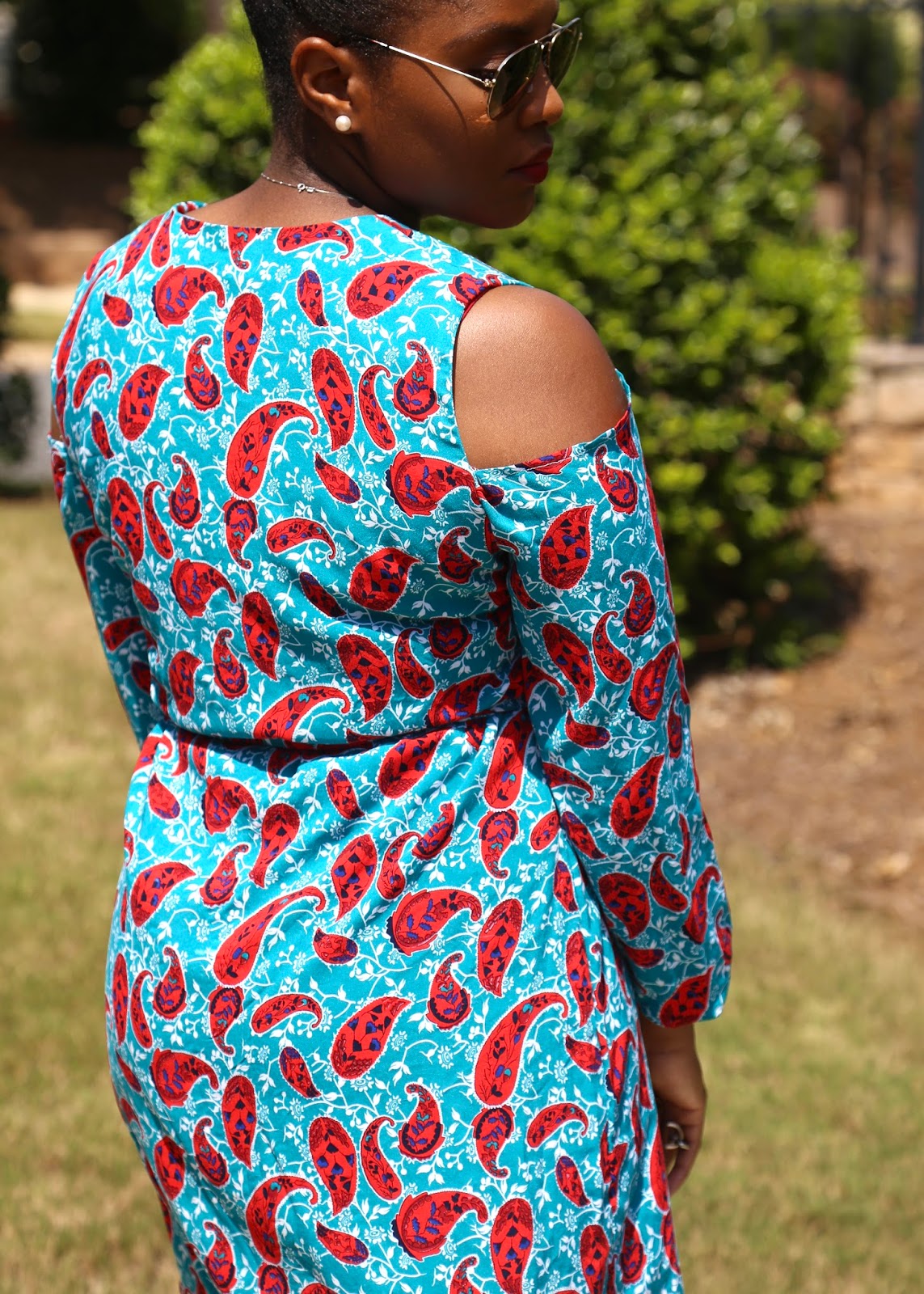 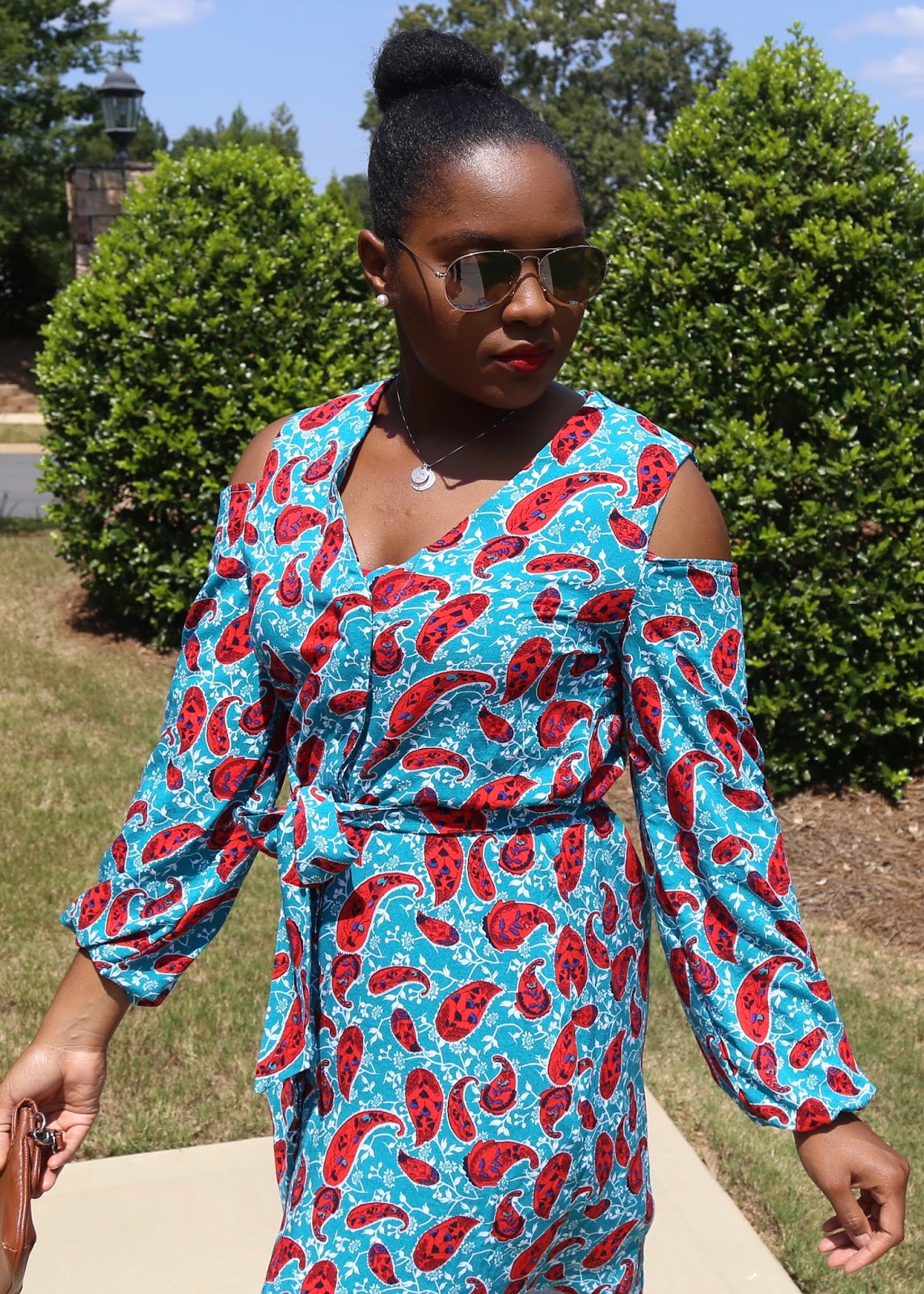 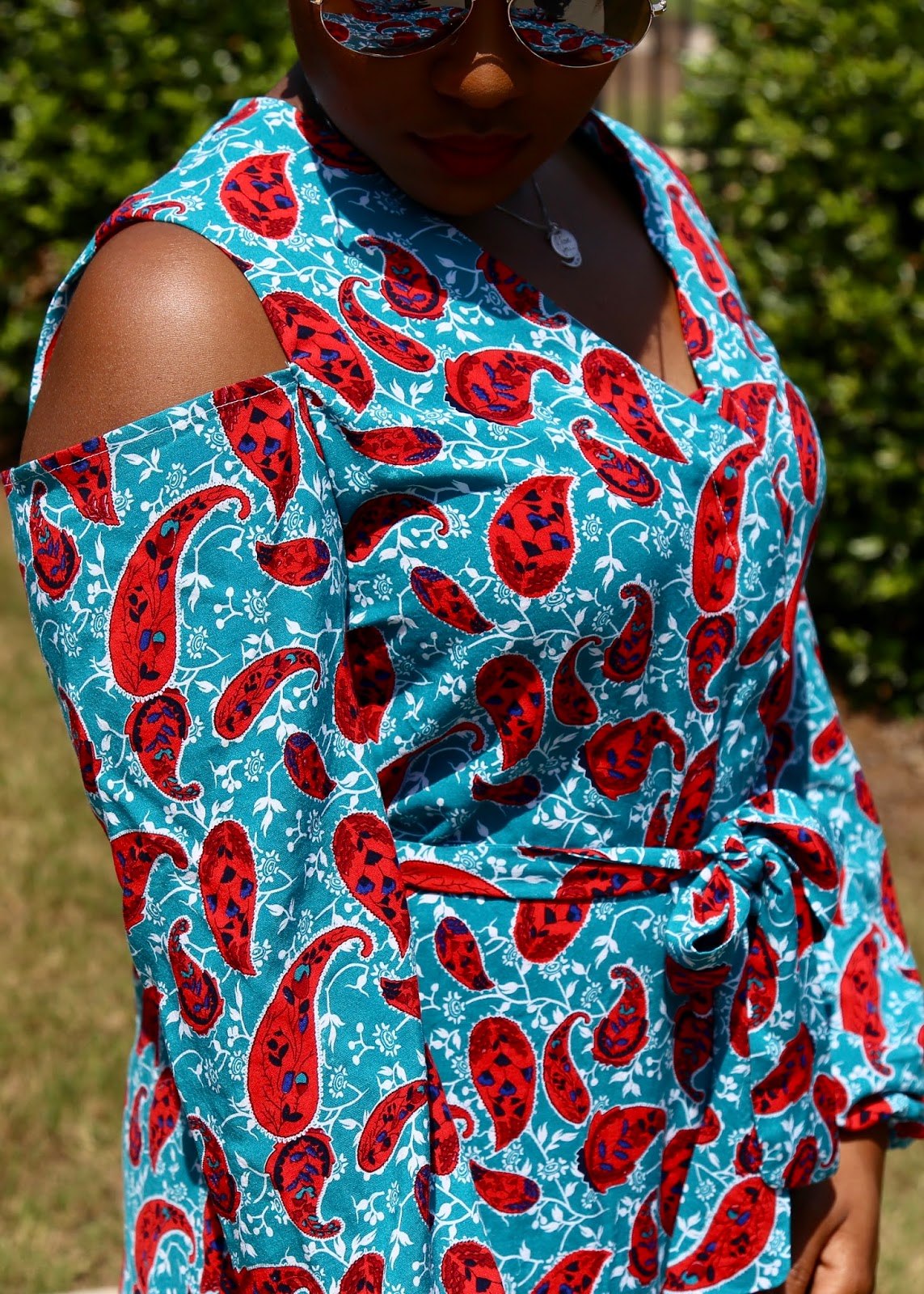